5 Quick Tips for Getting Your Husband Looking Great 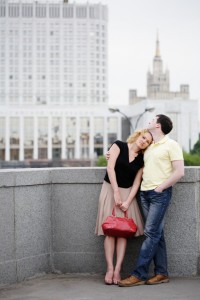 When there is a rush to get out the door and your husband needs to be looking great, it might be tough to pull him together. However, there are a few quick and painless ways to make sure he looks good. With just a few minutes and perhaps a little preparation, going out can be as easy to him as dressing for yard work.

Keep His Wardrobe Up to Date

Sometimes it is hard to rush out the door when your husband has nothing to wear. In order to make those rushed evenings easier, make sure his dry cleaning is done well in advance and that his clothes fit him well. Something like a Brooks Brothers suit can make your husband look great just by fitting his form properly.

Beard or No Beard

Your husband may not have had enough time to shave. In these cases, make a quick decision about his facial hair. Have him do a once over with an electric shaver that leaves a quarter-inch of stubble before dressing instead of having him carefully shave. Many men look dashing with a five o’clock shadow.

Hair Without the Fuss

Instead of trying to make his hair look perfect and stay put, let his hair look naturally good with a little help. Rub a quarter-sized dollop of gel on your palms and rub it through his hair, letting it stay just a little messy. That slightly messy look can go over well even at fancy dress events, so do not sweat it.

In three minutes, you can pull together all of the little things that will make your husband very attractive for the evening. Run a lint brush over his clothes to make sure he looks sharp and clean. Give him a nice cologne or aftershave. Lastly, if his shoes need a polish and you lack the time for a buffing, just rub a little polish on a washcloth and rub it into his shoes in a circular motion. Take one minute per shoe.

A man does not need accessories to look sharp. Therefore, if your husband is wearing accessories that are inappropriate for the evening, such as a paint smeared work watch, have him go without accessories. If he has the right accessories handy, bring them along in the car. He can get them on in a hurry as you go.

Remember that there are some things that cannot be done in a rush out the door. For example, ironing and washing. Try to make sure these are done ahead of time so your husband only needs a bit of the above to look amazing.

This was a guest post written by my friend Amanda.  I hope you enjoyed it!  What tips do you have for helping your husband look great?

In Sickness and In Health 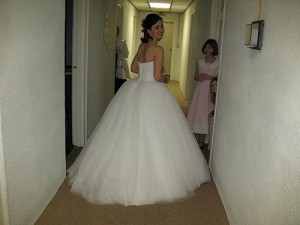 As you may know I’ve been married to the love of my life for a handful of years. Michael and I live in North Carolina and are in the process of raising a wonderful little girl and an energetic dog.  We said our vows in the church I was raised in on a rainy winter’s day.  The old wooden church decorated with white flowers was breath taking.

We said our “do you takes” and promised to love and take care of each other, in sickness and in health, for the rest of our lives.  Isn’t that all you need, love and a promise?  We weren’t the typical newlyweds, I moved into my husband’s set up house, we had two of everything and had a lot of items to get rid of.  We got comfortable in our local church and became actively involved.  A few months later my doctor informed me that my tonsils would have to go.  Michael was by my side throughout the entire recovery process waiting on my every need.

A few years had passed when my dentist informed me that I needed to have my wisdom teeth removed.  I already had two of the four removed but apparently the other two were interfering with my bite.  This was another occasion my husband stepped up to bat and took care of my every want and need.  I’m pretty sure I almost threw up on him once during this recovery too!

A couple of years later came the discussion about having a baby.  Women birth babies every day, right?  Well, at least I thought it was that easy.  After a few grueling months my  weakness and nausea subsided and my much hoped for smooth sailing pregnancy took over. 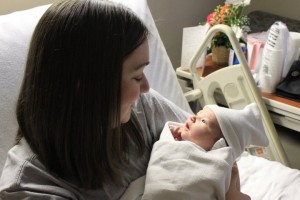 Six months later came our wonderful baby girl came with the perfect text book pregnancy. Because I have hypersomnia I had feared that I would have a troublesome labor. I researched for weeks as I read about possible risks that could happen and the statistics of those things happening.  I talked to Provigil/Nugivil‘s parent company, Cetaphil, for any light they might be able to shed on the subject.  I tried not to worry but because this was such an unusual disorder I wanted myself, my husband, and the doctors to be fully aware of the possible complications.  My husband always assured me that everything was going to be okay and to spend my time wisely by praying about it instead of worrying.  I’m glad that he was right and I gave birth to a happy and healthy baby girl!

Michael has always been so protective of me and never leaves my side when I am sick or in the hospital.  His love and protection makes for a speedy recovery!

This past December, my husband stayed home to watch my sweetie while I went to the doctor over a persistent stabbing pain in my stomach.  A few tests later and antibiotics were on there way to cure my problem.  Five months later, and two weeks ago, I went to my GYN with the same stabbing pain, tests were ran, and I was told to suffer it out until next month and my cycle would correct itself.  The pain persisted and increased.  Two weeks after my initial GYN appointment, I went back and asked for a different doctor.  He ran tests, discussed options, and promptly admitted me into the hospital.

I nervously called my husband from the doctor’s office to let him know that I was being admitted and we had to find someone to watch our baby girl.  After a few worried questions, he calmed himself down and worked towards convincing me to do the same.  He called and asked his parents to drive down and watch our little girl so he could be with me in the hospital.  About an hour later he met me in my hospital room, grinning from ear to ear, while dripping with sweat from carrying three bags and my littlest baby girl in her car-seat carrier.  I failed to warn him that I’m staying in possibly the farthest room in the building from the parking lot. : ( 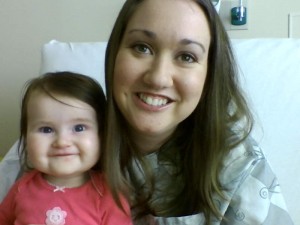 Five days later and he’s still cheerfully by my side, making the time pass quickly with his jokes.  The first day I was in here he wanted to put my baby girl in the bed, draped with an extra hospital gown, while I hid in the bathroom.  He wanted to wait until a nurse came in and act shocked because I had grown young, like Benjamin Button.  Unfortunately for him I was in too much pain to hide for his trick to work. 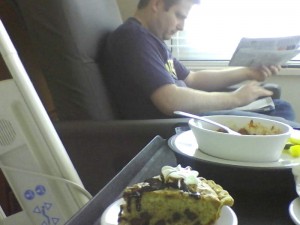 This afternoon he looked over at me and said, “Look at us, this is a glimpse into our future! We’ll be sitting in our retirement community in side by side beds. I’ll be working a crossword puzzle and you’ll be blogging.”  He always makes me smile!

The hospital staff have really been wonderful!  They’ve been attentive, pleasant, and quick to come if I need them.  The food isn’t half bad even though I don’t have much of an appetite.  It’s sad to say this but this bed is actually more comfortable than my bed at home.  I really should get that Sleep Number bed I’ve been eyeing!  While the stay here has been as enjoyable as a hospital stay could be I’m excited about the prospect of going home in a day or two.  I have to come back in six weeks to have my appendix fully removed so if you remember you can say a little prayer for me and for my husband who will be by my side helping me recover.  : )

My husband is my biggest cheerleader, encourager, and biggest fan, all in one.  When he said “in sickness and in health”, I’m not sure if he had any idea of what he was getting himself into.  Thankfully God did and He choose the right man for the job!

The Man of My Prayers and Dreams 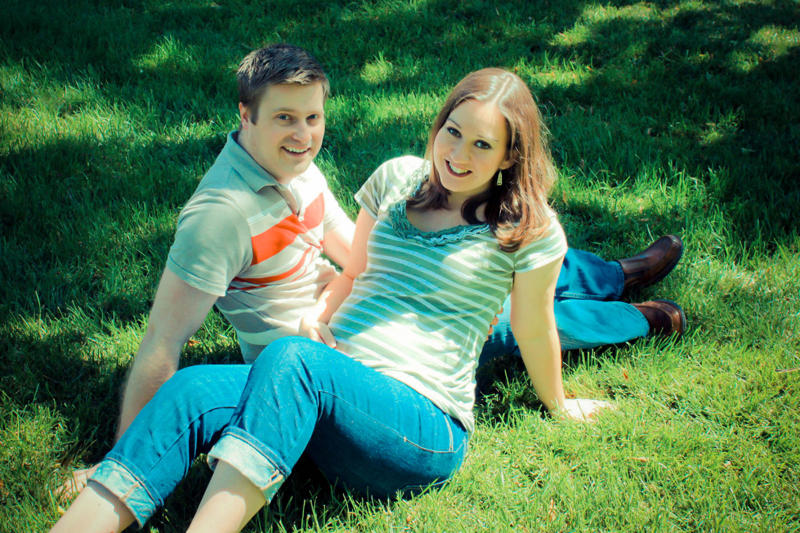 Over the past few years God has brought about one huge transition after another in our lives.  Let me say that in all caps: HUGE.  Family members have gone home to be with the Lord, illness has struck others, and various other burdens that have weighed oh so heavy on our hearts.  We’ve experienced  many days of change and new ways to rely on the Lord.  Every time I went to Mike looking for comfort he was quick to suggest that we seek God about what our next step should be.  We spent many hours in prayer seeking God desperately and as He always does, God came through.  Although I was often slow to embrace God’s leading I always found that His way was perfect.  Through trials we’ve drawn closer to Him, closer to each other, made new friends, been stretched out of our comfort zone and experienced blessings we wouldn’t have received otherwise.

My man is a believer in Jesus Christ.  He bears fruit of the Holy Spirit’s dwelling.  He has often prayed over me with a power that has left me speechless.  Recently I’ve began worrying over all the concerns that come with bringing a child into this world and raising her in the Word.  I even have some health issues that could possibly complicate labor and that terrifies me.  (I’m two days over my due date so if you think about it say a little prayer for me!)  Through it all he has been nothing but strong and supportive.  He has been my rock and soft shoulder to cry on.  I’m thankful to be married to a man who although he may worry, he has even a deeper faith in God.  He is God’s chosen man for me…and my chosen man before God.  I cannot imagine my life without the likes of Michael! 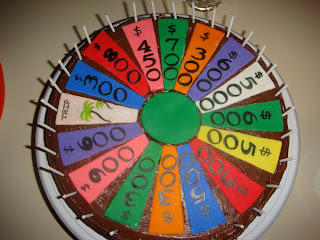 This is the Wheel of Fortune themed cake I made for my husband‘s birthday. 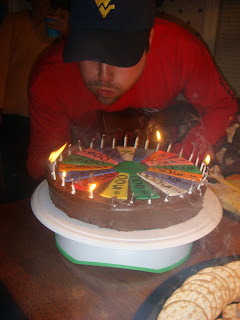 Blowing out the candles…lots of candles. 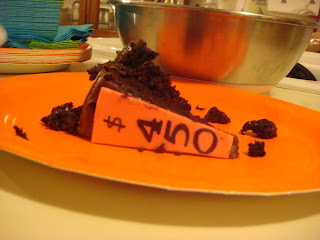 Only one piece of cake remains.

It was a busy day, a BIG surprise, and a fun evening with friends!

Let me Introduce You to my Husband

Dedicated until the job is done.

Good at creating song parodies off the cuff.

Into gadgets, geekery, and anything with an LED light in it.

Keeper of every piece of paper that he’s ever seen, heard of, felt, or smelled.

Loyal to a fault.

Other driver glarer, when necessary.

Quick to panic when it comes to his puppy dog.

Steady Steve (reference to his temperament).

Volunteer when anything needs done.

Xylophone not-player…c’mon what else could you put with ‘X?

Younger-looking than he is.

Filed Under: About Tagged With: husband