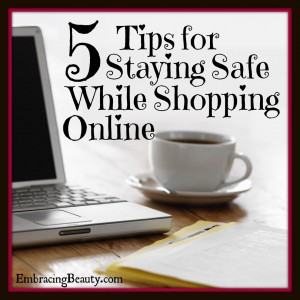 As Black Friday and Cyber Monday deals are quickly approaching I know many of you will be shopping in physical stores and online.  Each fun shopping opportunity presents different threats of identity theft. I’ve been paranoid about my physical safety most of my life but ever since I’ve been married I’ve been more concerned about the safety of my identity.  For some reason I had never thought about it before but my husband quickly educated me.  He wisely introduced me to the idea of shredding old bills and credit card offers, not carrying my social security card with me, and many other things.

Here are a few other tips to help keep your identity safe:

1.  Don’t shred your receipts, save them. Keep receipts in case you need to compare them against your credit card statement. If anything suspicious comes up you want to be ready to dispute it.  I’ve found that craft stores sell cute little storage boxes for  a dollar or two that are perfect to store receipts.  We keep a pile of them in the box with a paper weight until it gets to the top of the box then we wrap a rubber band around it and start a new pile.

2.  If a company or store calls and asks for your PIN or SSN don’t give it.  Ever!  I’ve had this happen before and I politely told them that I would call them back via their official number and they understood.  I called back and it was a legit problem that I was able to fix.  Don’t be afraid to tell them you want to call them back, if they are the real deal they’ll be understanding.  If they get upset or pushy them they are probably just phishing for your information.

3.  Smartphones are great for a lot of things but they are not foolproof shopping devices. In 2011, a 76% increase in malware targeted at Android devices was cited. This made Android smartphones the most targeted smartphone platform. Malware has also been reported via holiday themed applications and QR codes.  Be careful, don’t think that just because you’re buying over a phone that you are safe.

4.  Unfamiliar sites selling the hottest items of the year can often be fake and are set up just for this time of year.  These websites are set up with no inventory or intention of actually selling anything.  Use reputable websites and don’t try to save a few bucks by buying through a smaller site.  If you give your credit card information to a scammer you could end up paying much more in the end.

5.  Online auction sites that sell gift cards are more likely to be counterfeit or obtained through fraudulent means, according to the National Retail Federation.   It’s best to buy them in a store and getting the authorization slip with your receipt.

What tips do you have for snagging the best deals while remaining safe?

Don’t forget Lifelock for Life Sweepstakes that is going on now as well as Lifelock’s Twitter Party coming up this Friday for even more chances to win great gifts!

This is a sponsored post on behalf of LifeLock. Opinions are my own. 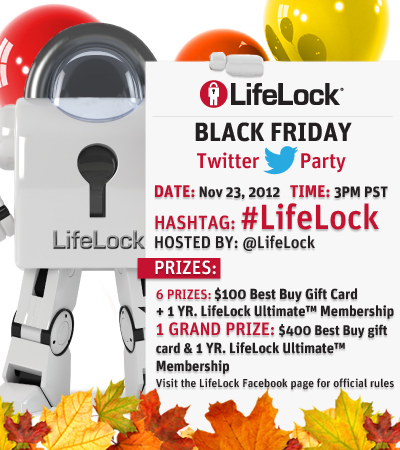 I’m a new LifeLock Ambassador and I’m excited to share about their upcoming Twitter party!  Join us on Twitter on Nov. 23, 2012 for a chance to win 6 great prizes.  The grand prize is a $400 Best Buy gift card and a 1 year LifeLock Ultimate Membership!  Visit LifeLock on Facebook for the official rules.

Where: Twitter with hashtag #LifeLock
When: November 23rd, 3pm PST
RSVP:  RSVP here or below