A few months ago, I heard about a company called It Works! that boasted an unbelievable claim.  They said they could shrink the fat right off your body using nothing but a body wrap and less than an hour of your time.

Their claims seemed so outrageous, especially when coupled with photos like this: 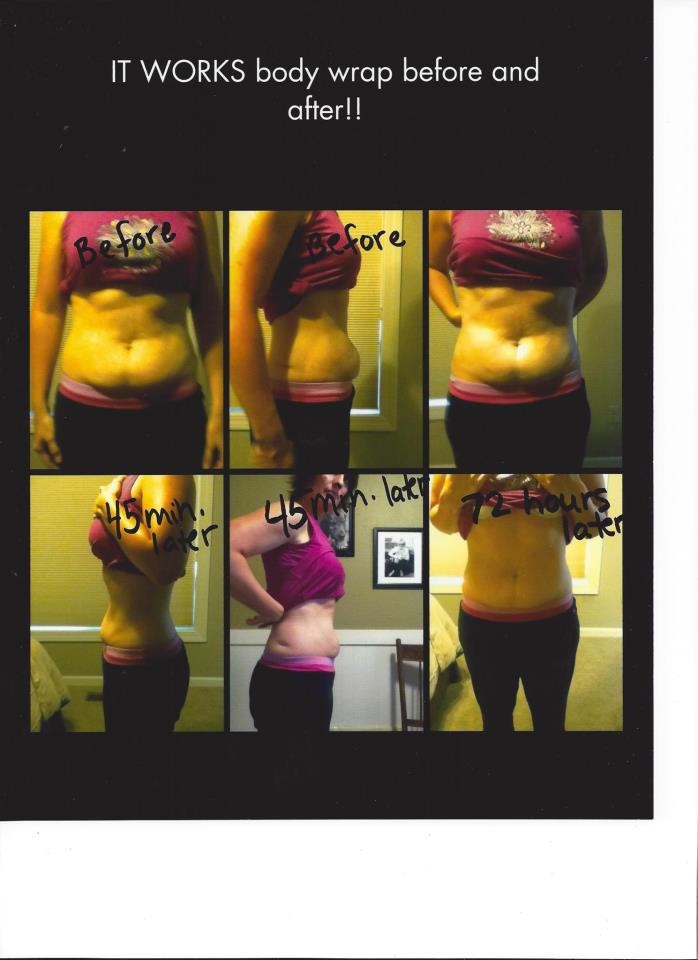 The first thought that entered my mind was, “I wonder if that really works?” Because I’ve had twins, people, and even though I work out and eat healthy, I still have a bit of a baby pooch that wasn’t there before.

Not only that, but the skin on my stomach looks like a sock that’s been stretched out one too many times.  I don’t have stretch marks, which is a miracle, but I also don’t look like I’m in high school anymore.

So when I had the opportunity to try an It Works! body wrap myself, I jumped at the chance.  Even though I was skeptical, I hoped this kind of magic was real because so far, the garden gnomes and kitchen elves have been a huge disappointment.

Saundra and her daughter Heidi, two independent It Works! consultants, sent me one individual It Works! Ultimate Body Wrap.  I was kind of hoping for a vat of the stuff but apparently they don’t sell vats.  Yet.  However, the Ultimate Body Wrap comes in packs of four so you can plaster them all over yourself if you’d like, although you should try to restrain yourself to only two at a time just to be safe.

Since I only had one wrap, I had to decide where to put it.  You can use the Ultimate Body Wrap anywhere from the neck down.  But, my baby tummy had to be the first to go.

The body wrap was very easy to apply.  I simply unfolded it and wrapped it around my stomach area, magic-lotion side down.  It smelled a little like Vicks Vapor Rub and tingled a little like it too.  That’s because it is loaded with botanical ingredients like menthol, camphor, and eucalyptus.  The tingling sensation dies down as the lotion soaks in.

One wrap doesn’t go all the way around unless you’re a twig, but I was happy to see that even though I’ve very tall, it was able to cover the majority of my stomach and my hate-handles (let’s be real, people–there is no love there).

The directions said to wrap myself up in Saran Wrap to keep the lotion in place.  My husband found this part of the process highly entertaining.  Not in a, “Wow, Baby, you’re so sexy” kind of way but more like a “Ha ha hahahahahahah!” kind of way.

The directions said to leave the wrap on for at least 45 minutes.  It also cautioned against leaving it on longer if this was your first time wrapping in case your skin was sensitive.  So, I tried to behave even though I kind of wanted to spend all day wrapped up in magic lotion, just in case the extra time made my backside smaller too.  It was a long shot. 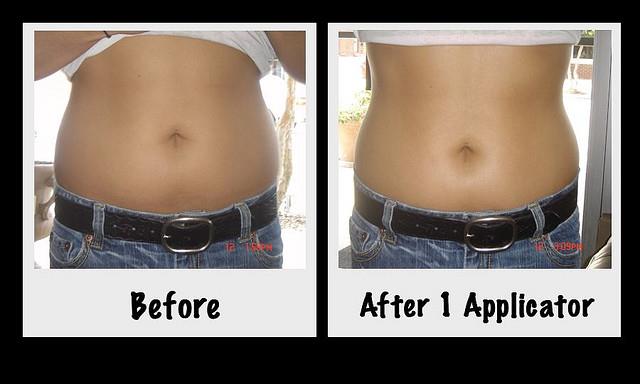 When it was time to take the wrap off, I rubbed the remaining lotion into my skin, as per the directions, and went about my day, making sure to drink plenty of water.  Saundra told me to drink half my body weight (in pounds) in ounces of water for 72 hours to assist the herbs in drawing toxins out of my body.  If I weighed 120 pounds (stop laughing) then I’d drink 60 oz. of water.

I drink a lot of water anyway, but it was encouraging to see that the It Works! products weren’t trying to make me skinny by drawing water out of my system so I’d shrink like a raisin.  Nope.  I was staying well hydrated.

By the evening of the first day (sounds biblical, right?) I was already noticing an improvement in the tone and texture of my skin.  My stomach felt like butter.  Anywhere the wrap touched was super-hydrated and springy like baby skin.  Even the little wrinkles around my belly-button (thanks, twins) had almost vanished.

But, as I’ve aged, the Great Migration has started to happen so it made sense that I’d notice the biggest difference in the areas that are a bit more…south.  I lost 1” at my belly button and 1 ¾” two inches below my belly button!  Wow!  That’s not bad especially since the biggest differences are normally seen after more than one application.  I was pretty thrilled!  In fact, I’d have to say it works! 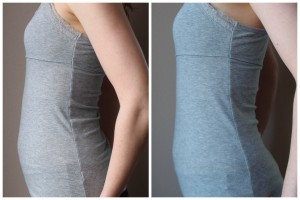 My own side profile pictures didn’t really do the wrap justice since I wasn’t quite willing to bare my belly for all of you. But You can already see how flat my stomach is becoming after just one application!

In fact, I think It Works! is the perfect thing to help get ready for all those summer events like weddings, graduations, and swim suit shopping expeditions.  You know.  Stuff.

So, we’re offering an It Works! giveaway so you can try the products yourself!  Heidi and Saundra got together and put together a prize package that’s almost as good as a vat of It Works! magic.  One winner will receive 1 Ultimate Body Wrap, 1 Facial Applicator (to tighten and tone the entire face), and 1 mini Defining Gel.  That’s a $60 retail value!

Kristen is the wife of an Army chaplain and the mother of five children, including twin boys who look nothing alike. She enjoys big grace from a mighty God and writes about all of it at www.fiveintow.com. Won't you stop by?