I just got this email about 20 minutes ago and I’m excited to share it with you! 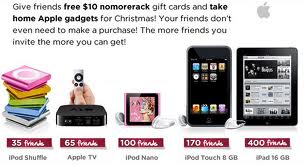 Want FREE Apple products? All you have to do is

There’s no limit on the number of Apple products you can earn, so refer all the friends you like! Substitute higher value items for the equivalent quantity of lower value items. For example, if you refer 400 friends you can pick up either an iPad 2 16GB or 4 iPod Nanos! It’s your call!

Also, if you’re new to NoMoreRack.com, you can get a $10 credit good towards any purchase of $20 or more.  After registering for a NoMoreRack.com account, click on the “My Profile” tab (top right side) and then click on “Redeem Gift Card” under “My Profile” and enter code P1070 to get your free $10 gift card credit!

If you have been a reader long you know that I love NoMoreRack!  Through their Friend Deals I’ve been able to score some awesome giveaway items for the site and a few things for myself.  {By the way, take a look at their Friend Deals and let me know what you would like for me to try to “earn” for our next giveaway}  I have promoted their Insane Deals, Daily Deals, and Friend Deals – I love them all!

Each day brings 8 new deals, and one extra deal where part or all of the proceeds go to a charity.  They have everything on there from toys, iPhone covers, and lip gloss to designer shoes, handbags, and clothes!  I’ve bought a good handful of Christmas gifts and stocking stuffers this way.

You may remember that a few weeks ago NoMoreRack was hacked and the internet lit up with complaints.  People were outraged and saying that it was a scam.  It’s not true, there is not a NoMoreRack scam.  It simply is not true.  They are a legitimate company that sells legitimate heavily discounted items!  Sometimes the shipping may be slow but that’s the only complaint I have.

Whether we like it or not, companies of all sizes get hacked every year so it’s best to always use safety precautions when shopping online.  I suggest not storing your credit card information on a website for quick checkout and when possible opt for Paypal or Google check out.  When you pay through a third party site you do have to take a few seconds to log in an extra time but doing so means that your credit card/banking information will not be stored in the online store’s database, giving you an extra level of protection.

No matter what NoMoreRack reviews you’ve read, positive or negative, take a few minutes and check it out for yourself!  I think it’s a great way to score deals and save money but that’s just my opinion.  If you like the site, great.  If you don’t, that’s okay too!  I just don’t want anyone missing out on a good steal because they have heard false rumors.

Brought to you by your friends at NoMoreRack.com!

Filed Under: Uncategorized Tagged With: NoMoreRack 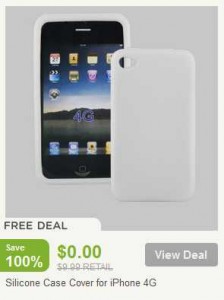 Check out this awesome deal that would make a great stocking stuffer!  You can score an iPhone 4G Silicone Case Cover free on No More Rack.  You only have to $0.99 to ship it!

Hurry, I bet this one sells out fast!!!

If you found this deal helpful, please take a second and vote for me {Ashley} in the Cheap Sally Bring Home the Bacon Contest. I’m trying to win a $100,000 and I am SO very close!  It only takes a second and you can vote every day through Nov. 28th. Thank you so much! http://www.cheapsally.com/profile/ashley-walkup/ 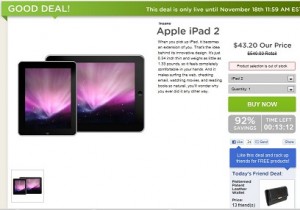 This is a screenshot from two days ago when I JUST missed the iPad on NoMoreRack!

Make sure you SIGN UP and confirm your email to be ready for when the next INSANE deal comes around!

Just keep an eye on their page to grab an INSANE deal.  A few readers have already reported their AWESOME deals!  Let us know what you score!

If you love great deals, please take a second and vote for me {Ashley} in the Cheap Sally Bring Home the Bacon Contest. I’m trying to win a $100,000 and I am SO very close!  It only takes a second and you can vote every day through Nov. 28th. Thank you so much! http://www.cheapsally.com/profile/ashley-walkup/

Friend Deals are Back at NoMoreRack!

NoMoreRack has brought back their Friend Deals! For those who are new to NoMoreRack, Friend Deals is a super easy way to get things for free!

All you do is refer one of your  friends using your referral link {they don’t even have to make a purchase!}.  Once they have completed their simple registration you can claim your friend deal for free. 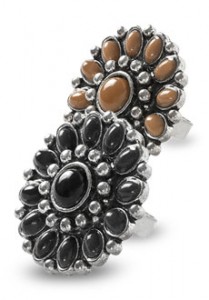 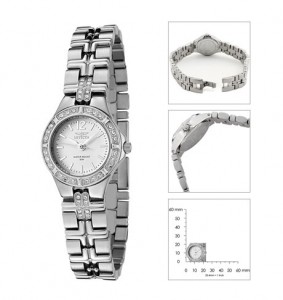 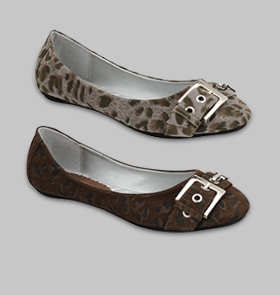 Check these and other great deals out fast as their items sell out quickly! 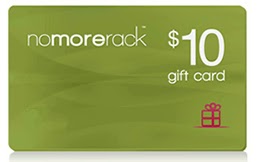 You may know that I have an iPad 2 giveaway going on now and one of the entries is sign up for a NoMoreRack account.  I just realized today that I never really explained what NoMoreRack is.  It’s a 24 hour “flash deal” site that has huge discounts on all kinds of stuff every day starting at noon ET.  Most things sell out fast, especially when the discounts are pretty huge!

Right now they are offering a $10 credit off your first order of $20 or more for new users.

Head over and get signed up and then check back for the new deals each day at 12 eastern time.

If you refer friends to get their free $10 credit, you can earn fun prizes like Apple products!  This is what I’m hoping to do and giveaway the prizes I earn back to you.  So sign up for NoMoreRack, and then go enter to win an Apple iPad2.