Live Your Life So That… 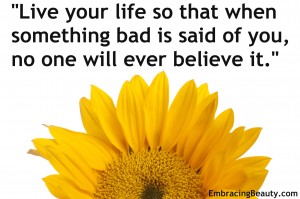 “Live your life so that when something bad is said of you no one will ever believe it.”  This has always been a favorite saying of mine and I was reminded of it recently when a friend’s Facebook account was hacked.  Someone was under my friend’s name and they were posting things that weren’t in line with his character.  I immediately reported the images to Facebook and signed under my husband’s account to do the same.

Today my friend had posted an an apology and all the comments following said that they knew it wasn’t him and several had reported the images to Facebook as well.  Here was his apology which I think was well written, “Several of you received a very inappropriate photo in which I was supposedly tagged. My apologies; it was a hack. I am sad that juvenile minds think they are adult when they post such rubbish. Get a life, whoever you are! Better yet, get the Savior and live a life that amounts to something!”  Well said from a man who knows about living a life that amounts to something!  This godly man recently retired from being an associate professor and librarian at the Bible college I went to.  He loves God and that is exemplified through his life of service!  Live your life so that when something bad is said of you no one will ever believe it!